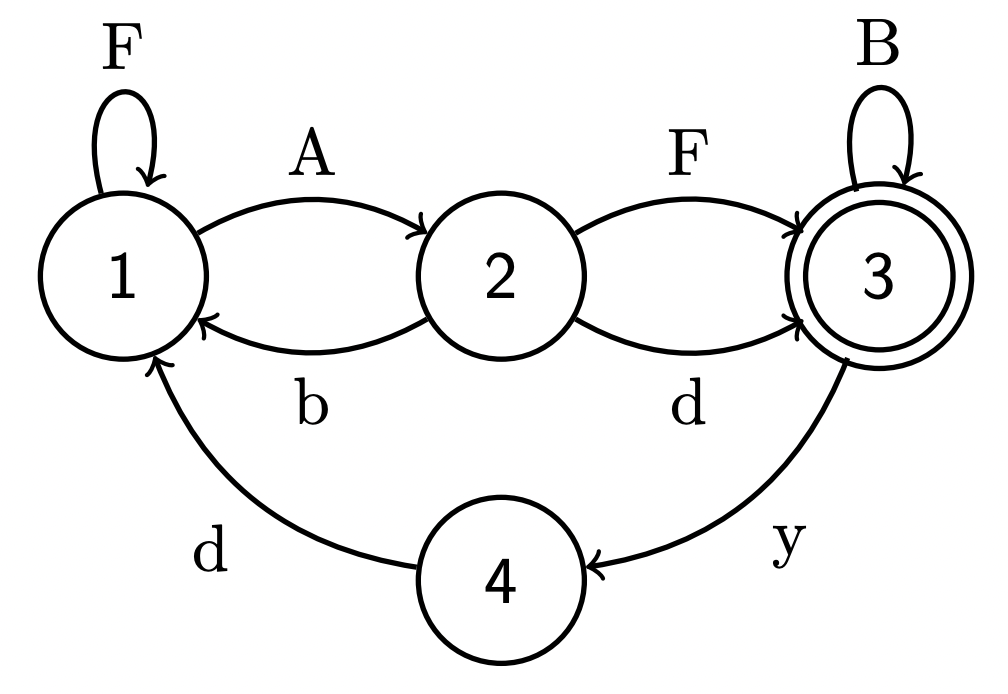 The factory design from the first sample input. The packaging station is marked by a double circle.

You must audit a factory that produces a number of products. Each product is subject to its own taxation rules and regulations. Unfortunately, deciding which rules apply to a product is not obvious since it can be difficult to distinguish the products from one another. It is your job to investigate if the factory is being completely transparent in its production process by determining if the factory is capable of producing two different products that are indistinguishable from one another.

A product can be produced by the factory if by starting at station $s_0$ there is a sequence of edges that can be followed, ending at a station in $P$, whose edge labels can be concatenated, in order, to create the product. The sequence of edges can be empty if $s_0 \in P$. For example, the following strings can all be produced by the factory described in the first sample input and illustrated in the figure: AF, FAFB, AbFFAd, AdydAd. Note that this is not an exhaustive list.

Each of the next $t$ lines is of the form:

where $s_1$ and $s_2$ ($1 \le s_1, s_2 \le s$) are stations, and $\sigma $ is a single character, consisting of an uppercase or lowercase letter. These are the transitions. The initial station is always station $1$. There will never be two transitions out of the same state labelled with the same character.

Please log in to submit a solution to this problem

You haven't made any submissions on this problem yet.